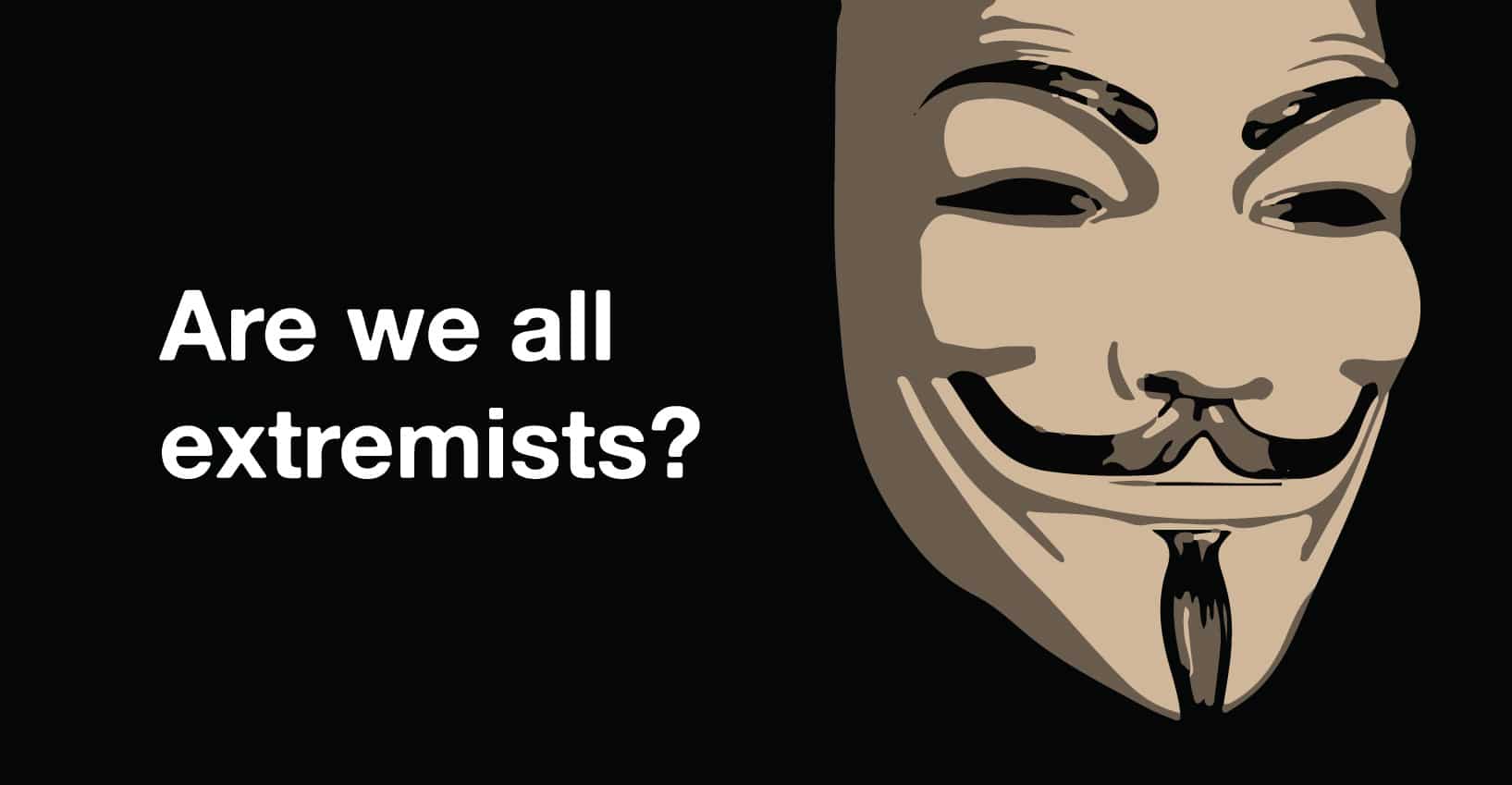 Are we all extremists?

If I put myself on the spot, I’d say that I occasionally behave in an extreme manner and struggle to do anything else other than the thing I’ve set my mind to, with a ‘’sod everything and everyone else’’ mentality. For me, being that way was never healthy and as I got older I began to realise that I could not function in normal society without compromising some of my expectations. Still, this isn’t the kind of extremism that is really troubling.

If we look at religious extremists, the media tends to paint them as misfits and interlopers. Do the rest of us share some of that extremism?

I see it all the time… people’s inability to compromise on the simplest of things.

These extreme attitudes can make us aggressive – not to mention uncompromising.

I’ve seen the most fun loving and seemingly chilled woman bare her teeth when asked to do something that put her outside of her comfort zone. I’m referring to something as simple as making a cup of tea, such was the connotation of inferiority embodied in the task.

Is this our society? We’re happy as long as we don’t have to give any ground? Is this the basis of our polarisation? Do we see compromise as a form of weakness or are we just not very nice when all is said and done?

Of course there are still those that let the other driver through, but there seems to be a very strong case of “it’s all about me” pervading our sensibilities.

With this extreme attitude we surround ourselves with others who share our views and then we look for heroes and leaders who represent them. These leaders are chosen on the understanding that they are the only ones who could ever get the job done and they look out for the interests of one group.

If that’s not bad enough, we seem to have taken these extreme views further, creating a society that isn’t about compromise but more about divorce. And we are really good at it using lawyers to carve up what we deem to be our fair share of a marriage.

Everybody seems to want their fair share and to hell with everyone else. Is it just me or does this seem a bit extreme to you?

17 million people want to leave and 16 million want to stay and nobody seems to care about what the rest of the UK wants. But how did we get here? We want Brexit, we want to remain and stuff everyone else.

I think the government has a lot to answer for as they toy with our minds. I used to think of politicians as those willing to compromise to win a vote, but now they seem more like one end of a pier or the extreme end of a thought.

One definition of an extremist, found in the Cambridge English Dictionary, is having or involving beliefs that most people think are unreasonable and unacceptable. If you happen to be considered part of the centre ground in current politics, you’d probably consider anyone on the left or right as unreasonable.

This look awesome. I respect…

wow i never knew this.…

This would have been an…

Me too, it looks awesome.

Ghana Socialist Leader: We Know Who Are Real Enemies And It’s Not Russia

Prey Teaser Trailer Brings The Predator To A Different Era

A Talk With Anaxent / Part One

Why Morbius was Cut from Blade II

Were We Really Created By God