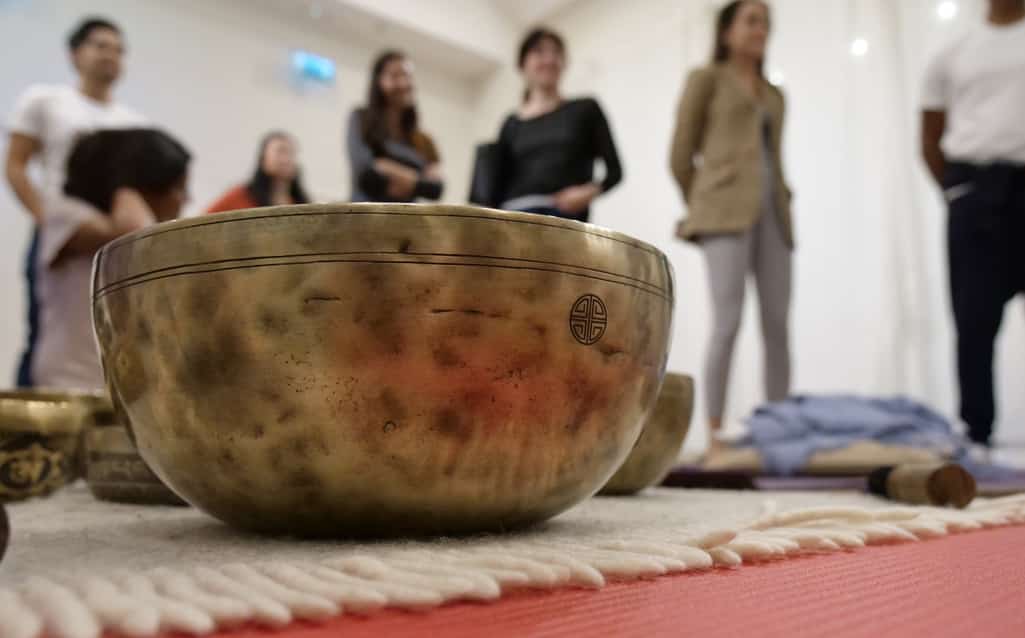 Can you Adam and Eve it?

A few years back I developed a frozen shoulder, which is pretty much where your rotator cuff seizes up. – Please look up “rotator cuff”, should you wish. We are talking about not being able to move ones arm freely and depending on the severity, it can be incredibly painful and frustrating.

The limited movement resulted in me having to give up playing the acoustic guitar which I’d happily strum away on, most days.

I endured 18 months of physiotherapy and a newly formed fear of the guitar. I began to associate the guitar with pain and discomfort, not joy and creation as before.

If ever I was ill as a child my mother would prepare a West Indian remedy. On the rarest occasions she would pack up the whole family and march us to the doctors. The best remedy for good health back in the day was good old fashioned sleep. The word “physiotherapist”, had yet to find its way into my vocabulary.

Life took a real change for me when my new group ‘The Misfit Sons’, ended. I found myself with more time to pursue other interests and I took on the role of Creative Director for a new online media site that I’d helped develop with my computer genius brother and his team of web developers. This allowed me the opportunity to turn the camera on real people and hear their stories. My initial thought was to find interesting people to interview. One of these rather interesting characters was a young lady called Niina Golikova. I had come across a post on social media inviting friends to Akasha Sounds, which I took to be a kind of yoga class and Niina was the instructor. Niina played singing bowls widely associated with Tibetan monks and Buddhism.

Now let me give you some background:

I had met Niina when I was still functioning as a singer songwriter. Bizarrely, I had cast her in one of my music videos and she had been every bit the professional model.
During the video shoot I remember her playing one of my guitars and if I’m perfectly honest, I was rather impressed. So here we were some 4 years later and not entirely sure what she’d replaced her modelling career with, I arranged to meet her and learn more about Akasha sounds. 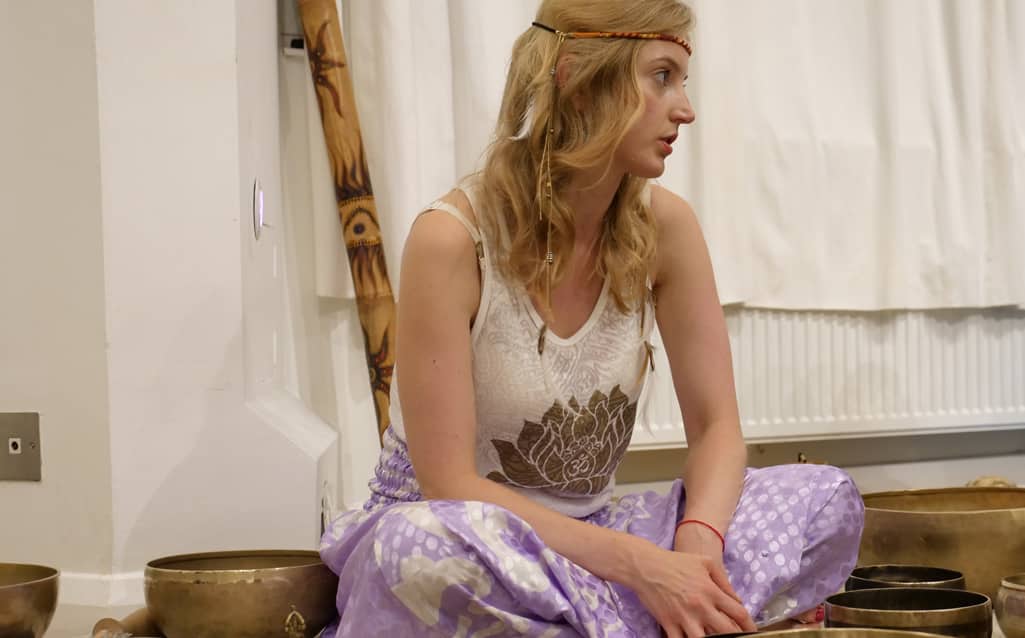 I landed at Westferry station, close to her studio, but still struggled to successfully follow google map directions. Funnily enough the studio was practically opposite the station, but let’s just say I somehow got lost affording me zero time to catch up with Niina and build up a rapport before the session started. After a very brief interaction, I was shown to a room and offered a mat.

Had it been down to me I would have been the voyeur in the corner, but Niina was quite insistent that I take part in the session and so I humbly obliged.
To be honest, I had no idea what I was getting myself into. I wanted to make the experience as authentic as possible and so did little or no research prior to getting there.

When I had notified Niina about my interest in writing an article on her class, she had no idea if I was qualified to do so. Clusterview was in its first throes but eager to define itself, but that didn’t change the fact that she was doing this on trust.

The Niina I met that day, was focused. I watched her assemble all her instruments and help arrange the room with an assortment of bronze coloured bowls and multi-coloured onyx stones.

I stood in the studio analysing everything, my mind was whirring as I saw an opportunity to take a picture. Niina asked me not to take pictures before the session so not to make the group conscious of the fact I was there in the capacity as a journalist and I respected that.

I was soon introduced to a new belief system and thought process that were at odds with my own sensibilities. The more I learned about the Akashic records the more my own belief system felt at odds with hers. I asked myself whether I could be objective?
I reminded myself why I was there in the first place and decided to jump right in. I removed all fear and apprehension. When the rest of the group arrived a real positive energy soon emerged.

Niina began the session with a short introduction into the meaning of the Akashic records, to the great benefit of first timers like myself.
The more I learnt, the more it stretched me intellectually. It was like learning just how small we are in the universe.

(in Indian religion) a supposed all-pervading field in the ether in which a record of past events is imprinted.

Basically, the Akashic records is the collective consciousness of every human being, both past and present and potentially in the future. If one can access these records through a process of meditation, they are able to re-live previous lives. The Akashic records exist in a dimensional plain alongside our own reality and dimension. 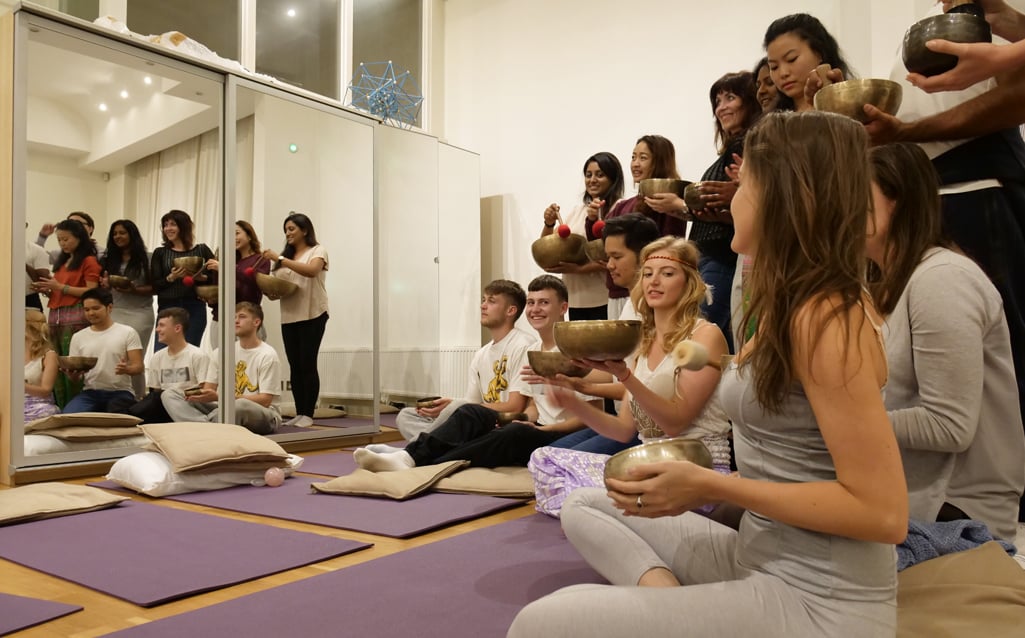 This might be a difficult pill to swallow, but is this any more astonishing than imagining a heaven and hell?

I was brought up as a Christian, I accept the belief that Jesus walked on water and is the son of God, however, billions refute this idea.

I hadn’t countenanced the thought of my soul travelling through time and space (Ether), but how else does ones soul get there? The simple truth is that we are all looking for the same answers and maybe I was one step closer to finding the ones i needed.

I was welcomed into a group and we had soon introduced ourselves. Everyone seemed very friendly and I quickly paired up with an Asian man in his mid 40’s who in conversation told me he was a Reikki teacher. He explained that he was a frequent visitor to the class and was very excited to be back again.

There were two other first timers; two white British lads who wouldn’t be out of place on a building site. 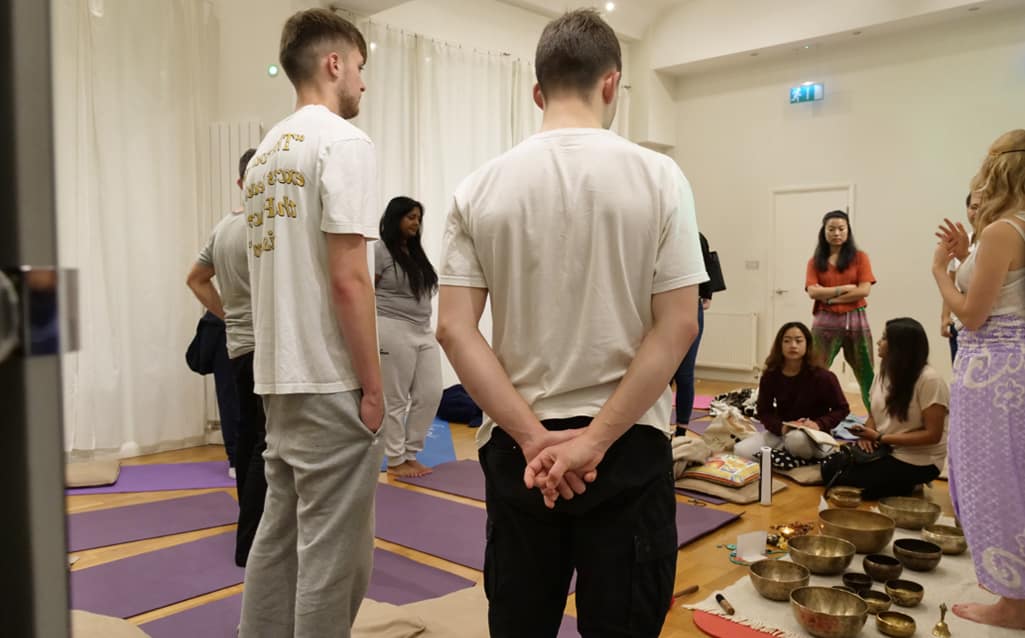 The group was an interesting mix of people and Niina asked us to form a circle.
We did some short exercises that were designed to help us relax and limber up our bodies. We followed this with breathing exercises which needed the help of your partner. This meant having someone tap you all over your body, front and back.

Niina began chanting and everyone followed suit. I have friends who are buddhists and I welcomed the opportunity to step into their shoes for a short while. All that we had done was required to prepare our bodies for meditation.

After a quick reminder of what we were all there for, we were asked to lay down on our mats and prepare for our journey. Niina reassured us that through the help of breathing techniques and her guiding voice we would be fine.
I settled down unto my mat. I laid down flat on my back, others on their sides. Niina, began playing her bronze bowls. Her taps on the bowl were gentle but the sound travelled well. The vibrations passed through me and I enjoyed it’s caress. Some of the class might well of begun their journey through the ether – for me, the experience was very different.

As I lay there on the mat I hoped to rekindle my memories of when I was out in the woods with other wannabe paratroopers struggling to find a comfortable place on a hard surface. The hard floor should have stirred those memories up again, but it did not.
I could hear the sounds, I welcomed them. The sound of the singing bowls were indeed intoxicating. I wanted to imagine them as an ocean washing over me, but I did not. I wanted to think about something, but as I lay there absolutely no image appeared. Well nothing other than the utter blackness that my mind found itself in. I was stuck in a void. If there was any light to be realised, it appeared as a crescent behind the darkness, but there was no penetrating glow. It was as if I was imprisoned in my own mind.

Try as I might to leave that place and join the others, presumably, travelling through the ether, nothing happened. The most surprising thing of all which I was very happy to share with the group at the end, was that I couldn’t imagine anything. My mind was  totally blank which for me was one part terrifying and the other part fascinating. My centre seems to have been formed in chaos and I struggle to shut down and relax, yet here I was  unable to stimulate a single thought for 90 minutes.

At the end of the session we were asked to share our experiences and much of the class weren’t ready to share their tales in the ether, but some talked of being other people and experiencing different stages of an eternal journey. I didn’t know quite what to believe, but I was fascinated by my own experience and couldn’t wait to get home and start writing up what I thought would be a simple article

We gathered together and I took pictures of an excited and happy group. Niina, let me know that I shouldn’t hesitate to contact her for any additional info. That being said, my intention was to write up something different. I didn’t know what that different would be, but I knew that my own ignorance would be a great starting point. I wanted something honest, something objective whether it was positive or negative for both me or Niina. 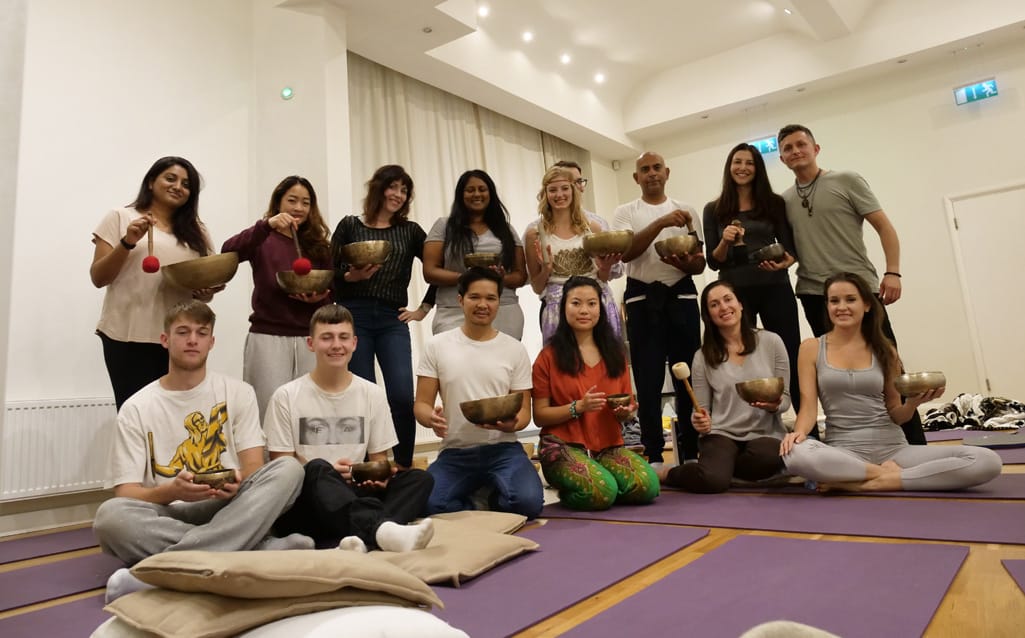 Now here’s where it gets interesting.

Remember before when I said that I learnt that you cannot control the outcome of a situation? Well, here I was sitting down recollecting my thoughts a few days later, when I began to realise something was different. Of course there was the slight pride I felt in myself for exploring other ideas and still have my faith, but something was different. I soon realised that the difference was the pain I had grown to live with. See the physiotherapy had helped me regain full extension of my arm but I had been left with a crippling pain. The only cure was to exercise every day religiously, but should I not exercise, I’d soon be punished for it. Yet, here I was feeling normal. I couldn’t quite believe it and in fact couldn’t accept that I was at all better until weeks without the pain emerging. Now, I can’t be sure sure if Niina’s singing bowls had anything to do with my miraculous recovery, but it is a fantastic coincidence. I have enjoyed 5 or more months without pain and my love affair with my guitar has reignited. Does any of this coincidence mess with my faith? Let’s just say that God works in mysterious ways and all of this might very well be of his design. Just know that should the pain return, I’ll be heading straight back to see Niina Golikova for one of her sound healing sessions. Oh, did I forget to mention that? It came as a surprise to me too.

Magnificent storyteller soldier reveals what he saw in Vietnam.

Sky News Australia reporting on pre-Christmas lockdown in the UK

The Power of Music on the Brain.

OUTSIDE THE WIRE Official Trailer (2021)