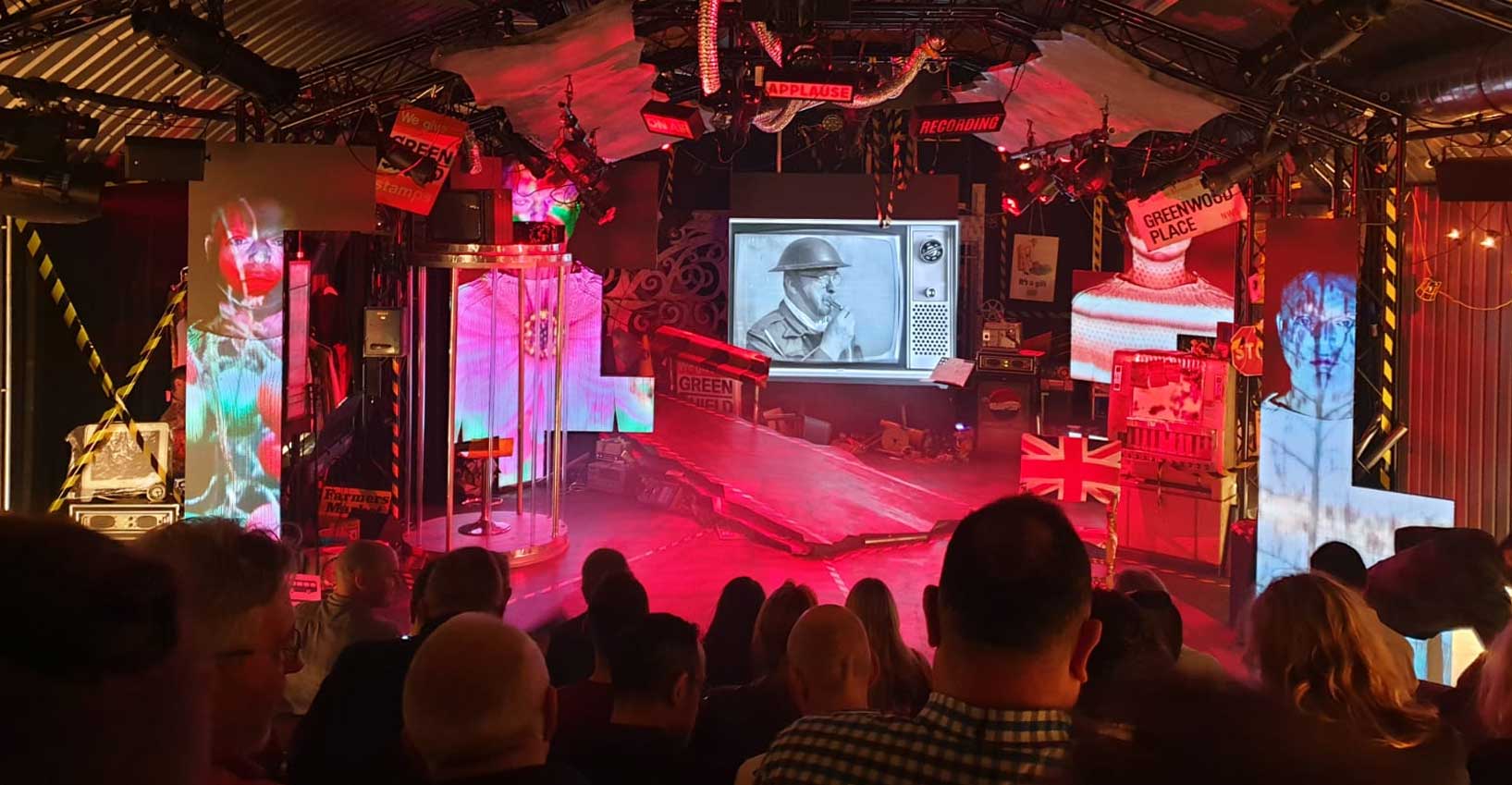 I was invited to see a show in London, then my friend, rather oddly, told me that perhaps he shouldn’t have invited me. At this point I felt compelled to go and as a result decided to write something about it.

Some people might be instantly put off by the title of this play, it is with a twist of proud pink bolstering a rather bold title. Why even call it Queereteeria TV? Perhaps it is because the author was sick of pandering to straight world view ideas and censored conformism or perhaps it was because this is as relevant as any bonafide TV show. Personally I think its neither and something more bold and extravagant than apologetic pap.

Queereteeria TV is at times vulgar and possibly not just for effect. I’d suggest that the vulgarity and allusions of sexual simulation are about more than simple provocation.

That being said, I imagine even an LGBT audience would wince at some of the language used. Some scenes forced me to avert my gaze, but that was because I am a straight black man and probably thought it was the right thing to do. Perhaps I’m not the audience this show was intended for when it was conceived in the mind of mad genius. Quite frankly, most of the straight black men that I know would struggle to get through the first few scenes, so worried are we that we might find something that appeals to our otherwise sensitive disposition; but in truth the characters are quite bewitching and at times you could be forgiven for seeing a rather attractive feminine resemblance. The gay audience were having a rip-roaring time and quite honestly why shouldn’t I? In fact when songs like ‘He Gave It All Up For Vagina’ and ‘Blow Jobs For Cocaine’ were being sung, I was quite at home imagining perfectly pruned quims and a gorgeous lady leaving my bed with a wrap of cocaine between her teeth. So easy was it to substitute one sex for the other.

Lady Domina Bizarre, played by Matthew Baldwin has a mouth of a brothel Madame, constantly lambasting every character that shares the stage. She would make a wonderful bolshy woman in real life, so convincing is her femininity. She makes long and colourful speeches that could very well find themselves uttered by Stephen Fry. There is a strong sense of educated diatribe that might give the typical man in the street good reason to consider walking out. But then you marvel at the sheer ballsyness of it all. And it becomes clear that the writer and actor Barney Ashton-Bullock doesn’t give a tosh. He knows his audience and he has just served them up a third helping. Yes, you heard correctly, this is the third instalment. So why hadn’t I come across it earlier? I’d probably need to be a part of the LGBT community. Such a shame, but that’s just the world we live in where two tribes rarely collide.

Before I digress, Queereteeria TV is a trilogy following the story of Torsten. The story has a dystopian theme, set in the future where the world as we know it is no more. Torsten is played by two people. Perhaps I’m giving away too much? Torsten the Elder is Andy Bell (Erasure), now here’s where it might get a tad confusing. Andy Bell is supposed to be a man who doesn’t age, he appears in the story as Torsten immortalised with youth and he flickers back and forth in the story and is played either by Andy Bell and a brilliant twenty something actor called Thomas Mann, but we are always supposed to see Torsten as this young character immortalized by a sealed chamber. The interplay gives us scenes with the young Torston and young Daniel played by William Spencer. I know, but it does add abundant energy every time the younger incarnation of Torsten appears. Plus we are greatly entertained to hear the voice of an 80’s icon. Andy Bell adds a musical element to the play and I can imagine a great many of the bums on seats came just to hear him sing again.

The first half does feel quite long but with the interplay between Lady Domina Bizarre, and Torsten (Andy Bell) enthused with 80’s pop songs, there is quite honestly a load of magic that even a straight guy can garner from this play. And why not when we should very well be way past caring that some still choose to live in a bygone era. If I had the choice of one of those eras, I’d probably choose the 80’s and Queereteeria TV wouldn’t go a miss.

There is a story, of course, and a love interest and this glues the whacky, zany, and vulgar humour together. We are also treated with a show-stopping solo performance by Rupert that is played by the legendary jamaican singer and actor Peter Straker.

The 2nd half is a whip! Frankly once you’ve got it, you just get on and enjoy the show which is both very funny and arresting. In all fairness, Queereteeria TV isn’t for everyone but it is definitely a great show and if you are willing to turn your television on and explore the many channels on offer, it might just be for you.

This look awesome. I respect…

wow i never knew this.…

This would have been an…

Me too, it looks awesome.

Prey Teaser Trailer Brings The Predator To A Different Era

A Talk With Anaxent / Part One

Why Morbius was Cut from Blade II

Were We Really Created By God

So I’m Not Black enough?